Saudi Arabia’s used car and aftermarket segments have experienced a renewed demand in the recent times. The used car market is expected to grow at a CAGR between 5.5%-6.3% during the period 2019-2025. The market is forecasted to generate a revenue of 28.7 billion USD by 2025.

There has been a 65% decline in the sales of new cars in 2020 due to the complete lockdown owing to Covid-19. This dip in the sales of new cars continued for more than a year. As the Government imposed restrictions on movements and the economy received a setback, naturally, footfalls in car showrooms dipped. But there was a shift towards owning private automobiles as the virus continued to spread. This gave rise to the used car market as people started looking for affordable cars for daily commute and traveling long distances. Consumers highly value less-aged cars and popular brands with good resale value.

Although, to a great extent, the Covid-19 pandemic is responsible for the surge in the used car market, other financial and economic factors have played their part in accelerating the growth. To counter the financial and economic impact of Covid-19, Saudi Arabia hiked its VAT from 5% to 15%, effective on 1st July 2020. The hike in the VAT implied an inevitable price increase for new automobiles. Owing to the lockdown, many customers had postponed their decisions of purchasing new automobiles. This decision got further spurred by the announcement of the VAT hike. It has given the necessary impetus to the used car market, which is forecasted to see uninterrupted growth in the coming years. The consumers interested in buying a new car traded their existing car before the price hike during the pre-implementation of the VAT phase. As a result, there were surplus sales of used cars.

Almost 50 % of the population in KSA is at an average age of 30 and below. The youth population, who has just started getting into the job market prefer used car to new ones as it gives a cost-benefit advantage to someone who has just entered his first job. Another big customer segment of used car buyers are the expats.

Often many expats are on short duration contracts with their employers and prefer purchasing a used car rather than shelling out a significant amount for a brand-new one. As a result, the working professionals and expats constitute the major population of used-car buyers.

Owing to the Covid-19, many people have lost their jobs and a stable source of income, both long term, and short term. With domestic and international travel freeze among the expatriates, there was an enormous supply of used cars from rental companies and expats who left for their home countries sold their cars at low prices. As these cars made their way into the market, the market price for used cars went down for a brief period.

Thus, the used car market saw a surge as a used car seemed like the most affordable option to own a private vehicle during and post-pandemic.

In KSA, the residents’ dependence on personal cars has always been high. In their opinion, owning a car is important now for safety and hygiene reasons owing to the pandemic. Since the onset of the pandemic, there has been a shift in mindset of the consumers as they are open to look for used vehicles rather than new cars- used cars have proven to be a great alternative for most consumers.

The growth in online platforms to buy and sell used cars has also played its part in incremental increase towards sales of pre-owned cars. To meet the challenge of third-party online channels, many authorized dealerships have increased their online presence. Customers can now have 100% end-to-end transactions without visiting showrooms and at their convenience of sitting at home. Recent research on online trend has revealed that almost 6 out of 10 persons are willing to consider purchasing a vehicle online.

Major independent dealers are leading the way in the used car market. Almost 16% of Used Car transactions took place by independent used car dealers. Most of these dealers have opened up digital marketplaces to purchase and sell used cars. Digital marketplaces for vehicles like Carzaty, Syara, DubiCars, Motory, and SellAnyCar.com are prominent players in the used car market. According to Bloomberg, a unit of Saudi Arabia’s sovereign wealth fund has lent USD 35 million in funding to help the online car trader SellAnyCar.com expand its online kingdom. In comparison to purchasing a car, more respondents are using online websites to sell their cars. Western Nationals reported greater use of online websites for car sales. These online platforms allow consumers to sell and purchase second-hand vehicles on their own. 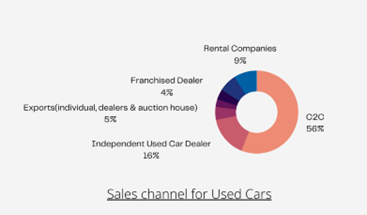 To give consumers an enhanced experience, the online platforms are using the latest technologies. They are implementing 360 degrees view of the interior and exterior, detailed vehicle history and inspected reports, and more to give users a satisfying browsing experience. These factors help consumers make a decision quickly and this has paved the way for the online used car market.

In the current situation, customers have postponed the purchase of new car until there is more clarity in the near future. As a result, close to 50% of the buyers have expressed a strong desire to purchase high-quality used cars at a reasonable price. This seems like the most rational decision as consumers are financially vigilant and are looking for affordable vehicle options.

In 2019, almost 20% of the vehicles on road were sold in the used car market. In the next five years, this ratio is likely to increase in favour of used vehicles. Online players will take advantage of this and provide good value for money. As this will lead to expansion of used cars in the market, consumers looking to purchase a car can secure a good deal on these vehicles.

The perception among used car dealers is that Saudis replace their cars between 2 to 4 years, while most of the expatriates change their cars after 4 years on an average; however, given the current pandemic scenario, younger Saudis entering the workforce and women being allowed to drive, Saudis are also likely to retain their cars longer and the average age of most second hand sale is likely to move towards 5 to 6 years.

Generally, consistent new car market leaders, including Toyota and other Japanese vehicles are sold after 4 to 6 years of ownership compared to American and European Models which are sold after 2 to 4 years.

The resale value of Japanese cars (especially Toyota) is higher than European and American Cars, as the market deems that Japanese cars have better performance in KSA conditions, relatively low cost of ownership, better mileage, and easy availability of spares, and also lower price of spares.

With the surge of Used Car market, the after component and accessories market is rapidly expanding. Used Car are more likely to require a faster part replacement or failure of other automotive components.

As the expats constitute a majority of the population, the sale of used-cars will be at an all-time high. Since they are likely to avoid making new car purchases, they would retain their car for a longer period. As a result, they will spend more on higher maintenance and accessories.

Moreover, add-on services on used cars are driving the growth of the used car market. As the companies launch new features, existing car owners want to upgrade their cars with the latest features. The customer experience and business models have also been modified with the market growth of Used Car. Dealers are assuring aftersales assurance and servicing to increase consumers’ confidence in used car. Rising awareness among vehicle drivers for boosting vehicle performance and efficiency in terms of looks, speed, and safety is also contributing to the market growth of the aftermarket component and accessories.

The aftermarket component and accessories will become more structured and organized for the convenience of consumers. The growing number of retailers providing automotive aftermarket services, both online and in-store, is expected to expand in the coming years, strengthening the industry.

This aftermarket component demand can also create immense potential for OEMs. It was forecasted dealers and OEMs will have a more organized structure for used car sales boosting the consumers’ interest, starting from 2021. OEMs entering the used car business also opens up alternative revenue stream for themselves which in turn gains greater significance in times of an economic slowdown since consumers tend to walk away from making big purchases such as investing in a vehicle. OEMs can bring in reliability, more choices, and quality for consumers in the aftermarket. OEMs can introduce value-added offers, vehicle certification, pre and post purchase inspections. Vehicle certification is an important factor in building consumer trust in the used car market. Buyers have shown keen interest in purchasing Certified Used Cars. Many independent automobile dealers provide certifications for pre-owned cars with detailed inspection reports available for consumers.

Almost 56% of Used Car transactions are C2C. This implies Government’s VAT hike or other policies will not have a direct impact on Used Car transactions. Users stated ease of transaction as the primary reason for selling their car directly to another consumer. A good price was the major factor followed by knowing the person, guarantee, warranty provided, and mileage of the car.

As the Used Car industry becomes more organized, more financing options will incentivise consumers to purchase used cars. In the coming years, many financial companies may open up different avenues given the surge in the purchase of used cars, which is not offered currently.

The Used Car market in the coming years will be dominated by more franchised dealers selling certified pre-owned cars and organized independent dealers. While the online marketplace is still in its nascent stage, more people will shift their purchasing option online due to the detailed inspections and financing methods offered. Consistency, cheaper cost of spare parts, and convenience of the aftermarket will contribute to the Used Car market growth. As the sector becomes organized, there will be more and more consumers choosing a pre-owned luxury or regular use vehicle.

We’re Looking Forward To Help You

Get in touch with us today and let’s start transforming your business from the ground up.